How The Bagel Bakery Can Help You Live Longer 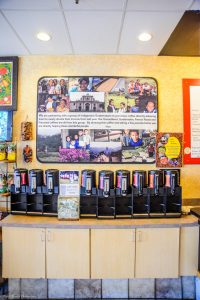 After reading the title of this post, you may be asking yourself, how on Earth can a bagel shop (albeit the best bagel shop) have the power to help me live longer? Well, the Bagel Bakery itself will not help you live longer unless you take into account the happiness we bring you. Coffee, which we make and sell in store, however, has been scientifically proven to lower a person’s risk of death by over ten years.

The study was conducted on almost 500,000 British adults and revealed an extended lifespan of those who drink at least eight cups O’ Joe each day. That sounds intense, but it just means you’ll be spending more time at the Bagel Bakery to get all eight cups! The best part of this whole study is that not only did this study show that the coffee drinkers had a lower risk of death than the abstainers, but it also showed that their lower risk of death coincided with a lower risk of cancer and heart disease. The researchers have not yet been able to pinpoint exactly how it reduces the risk of death, but hey, we’re not complaining! We’ll take any excuse to drink more coffee!

Stop by today to get your eight cups of freshly brewed coffee and live a healthy life with your friends at the Bagel Bakery!